This report is a summary that displays information about electronic EOBs (ERAs) that have been released or closed at any point. It displays when they were closed or released and by whom. If ERAs were released, it also shows the number of errors, when the error report was closed, and who it was closed by. 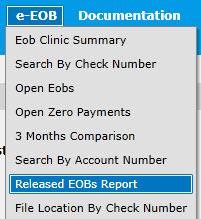 To begin a search you must enter an EOB Start and End Date. You can also enter a specific check number.

The report displays a summary of information related to ERAs that have been released or closed through the Release ERA process. The report includes blue drill-down links to view the EOB detail or to view the Error Report.

Did this answer your question? Thanks for the feedback There was a problem submitting your feedback. Please try again later.
Last updated on August 4, 2020